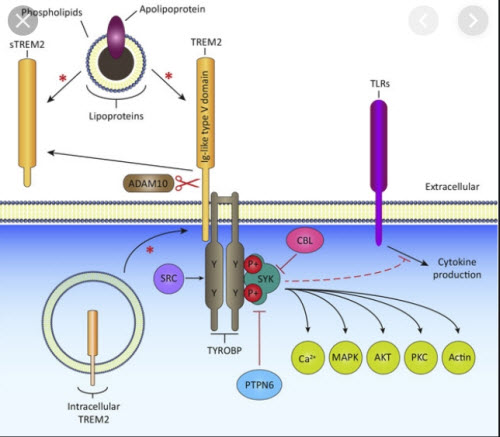 What exactly does this Trem2 brain protein do? According to researchers at the Munich Institute for Stroke and Dementia Research, higher levels of Trem2 helps immune cells clear plaque-like cellular debris from the brain. The efficiency of the cleanup is measured by how many protein fragments shed into the cerebrospinal (CSF) fluid. They conclude that increasing the levels of this brain protein could be the cure, or at the very least, slow the decline and provide a better quality of life.

Trem2: What Is This Protein?

In the brain, this protein are made by microglia. These scavenging immune cells help to keep the brain healthy, by cleaning and removing cellular debris. This debris also includes  amyloid-beta plaques — which is the hallmark characteristic of Alzheimer’s disease.

The scientists evaluated 385 senior citizens, both with and without Alzheimer’s disease, over a four year span.

They found that Alzheimer’s patients with higher levels of Trem2 in their CSF showed a slower decline in their memory and cognitive skills. The disease in this group also progressed more slowly compared to the group with lower levels of this protein. The progression from mild memory impairment to full blown dementia was also significantly slower.

These new findings suggest that treatments designed to boost TREM2 brain protein could eventually bring a cure for this destructive disease. The National Institute of Health (NIH) has stepped its research in this area to find that cure.

The current focus is to find how to when to target TREM2, in order to increase its’ maximum affect. Slowing the progression of the disease, will at least, improve seniors quality of life.