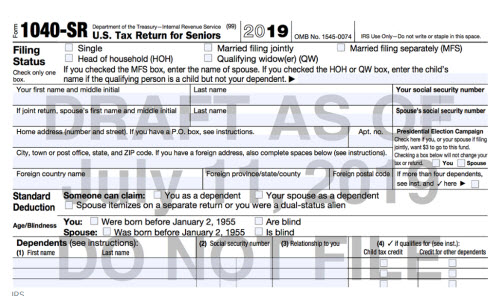 A seniors new 1040 Tax form has been introduced by the IRS. The new form is geared to seniors aged 65 and older. It simplifies the questions as well as reducing the number of categories to be filled out.

The final version of the new form will be posted on the agency’s website before the end of the year and be available to use for the 2019 tax year.

Drafted to be easier for aging eyes to read, the two-page Form 1040-SR uses a bigger font than the current standard Form 1040 and includes a chart for calculating a taxpayers’ standard deduction.

Congress directed the federal tax agency to create the new form when it passed a budget bill in 2018.

To use the new form, filers, including both spouses, must use the standard deduction rather than itemize.

Lines for various sources of retirement income such as Social Security benefits, IRA distributions, pensions and annuities are displayed on the first page of the form. In addition, Tax-preparation software will be able to generate a 1040-SR. Everything about the new form is designed to make filing for seniors as easy as possible.

Lines for various sources of retirement income such as Social Security benefits, IRA distributions, pensions and annuities are displayed on the first page of the form.

Form 1040-SR may feel more comfortable to some seniors and will make it easier for them to calculate the standard deduction. However, people who file electronically or use a tax preparer won’t benefit as much from the redesign.

The IRS doesn’t have current data on how many older Americans itemize their deductions. However, the IRS does see a significant decrease in those who itemize since the tax code changed in 2017.  The 2017 change increased the size of the standard deduction. In addition, it also capped the amount of state and local taxes that filers can deduct.

The IRS is soliciting comments on this draft form by Aug. 15. The agency will then post a second draft of the form on irs.gov near the end of August, 2019.

Your ticket for the: Seniors New 1040 Tax Form Can Simplify Filing Returns