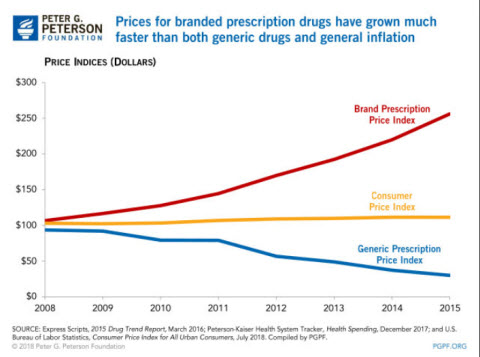 The prescription drug battle continues at the State level. This comes after drug manufacturers recently won a lawsuit to block a Trump administration rule, requiring them to include their drugs list price on their TV ads.

The lawsuit was brought by Pharma giants —  Merck, Eli Lilly and Amgen, who filed a lawsuit against the Trump Administration to block the U.S. Department of Health and Human Services (HHS) TV ad rule, which was due to go into effect July 9, 2019. Drug companies, understandably, don’t want price transparency known among consumers. In recent years drug prices have skyrocketed, — hurting the poor, senior citizens, and even the middle-class consumers.

Currently, Americans pay the highest prices for prescription drugs of anyone in the world — typically paying 2-3 times more. We pay more than consumers in Canada and the U.K. for these exact same prescription drugs. Truly incredible. These are the same drugs, made in the same factories, by the same manufacturers.

The new State laws allow Medicare to negotiate lower drug prices, as well as bringing more lower-priced generic drugs to market.It also outlaws the “pay for delay” scam, in which the big drug companies pay generic drug manufacturers to stay out of the market.

Prescription Drug: These States Are Fighting For You

Here’s a list of recent legislative developments on rolling back the high cost of prescription drugs. In many states, the pharmaceutical industry fought hard to oppose these policies:

Your ticket for the: Prescription Drug Battle Continues At The State Level