A noninvasive stress detector can now measure stress levels without actually causing the patient any nervousness.

It’s now possible to get clean readings without worrying the measurement itself is causing the patient worry or discomfort.

This is a great advancement as stress related to our mental well-being, including that associated with depression and anxiety —  is difficult to measure in practice. Levels of cortisol, a steroid hormone, is a marker doctors use to measure changes in a person’s mental state. Standard blood tests measure the cortisol levels. The problem till now has been that the actual stress test measurement increase stress levels in most people.

If someone asked you right now how stressed you are, what would you say? A little? A lot? You do not know?

These responses, are not useful to researchers and medical professionals because they are subjective. Nonetheless, in lieu of a better method of measuring stress, the common method for years has consisted of a stress questionnaire. The main alternative is a blood test — but requires a trained professional to draw the blood Drawing blood itself is stressful and skews the results.

Noninvasive Stress Detector: How It Works

Researchers at Caltech have introduced the first noninvasive, wearable sensor that can detect changes in cortisol levels directly from sweat in the skin.

The sensor is made of one layer of carbon, formed into a 3D structure that has tiny holes throughout. These pores contain cortisol antibodies and, when sweat reaches them, they bind to the cortisol, something that can be detected electronically by the sensor.

The sensor works in real time and provides instant and accurate stress measurements. During their study, two experiments were carried out.

First, a participant was tracked for one week and cortisol measurements were measured throughout the 24 hour cycles.

In the second experiment, volunteers performed aerobic exercise routines to change their cortisol levels and then had them tip their hands in ice water. In this way the sensor was able to constantly measure  cortisol fluctuations. 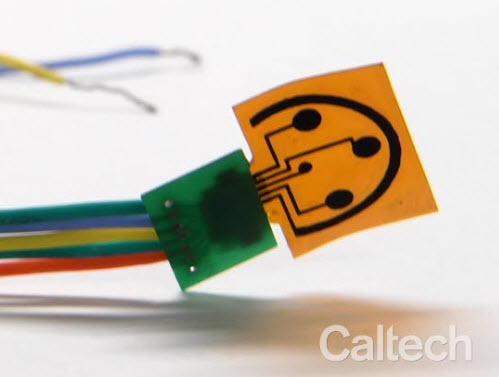 Your ticket for the: Noninvasive Stress Detector Measures Stress Without Causing It