New Prosthetic Leg With Sensors Works, Feels Like Real One 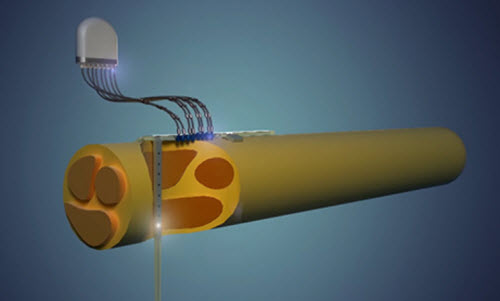 A new prosthetic leg containing internal and external sensors, provides sensory feedback to the walker, much like the feedback provided by a real leg.

While today’s prosthetic legs come in a variety of designs, they still lack the ability to give users a natural sense of themselves. Instead, they feel like man-made devices strapped to the stump, and not as part of the body.

But now, researchers from Zurich and Belgrade, together with the companies SensArs and Össur, have combined to manufacture a prosthetic leg that has a sense of touch.

SensArs, is a Swiss firm, that manufactures an interface that links a prosthesis with residual nerves in the thigh to create a neurofeedback mechanism. Two patients with an above-the-knee amputation had this neuro-stimulation system implanted at the University of Belgrade.

Following calibration and trial walks to get accustomed to the new device — both  volunteers demonstrated significant improvements in their walking ability. Indeed, they were able to walk a difficult sandy surface with a more natural gait.

New Prosthetic Leg: How It Works

Pressure sensors are attached to the sole of a commercially available leg as well as around the knee. This provides real time feedback to the walker to know where in his gait, his leg is at all times. Next, electrodes and a neuro-stimulator are implanted.

Once healed, calibration is necessary. Researchers evaluate which signals best match the natural feeling of walking. They are transmitted to the neuro-stimulator and then onto the residual nerves toward the brain.

The volunteers in this study were able to sense their legs and didn’t have to look at them for assurance. They also spent much less energy walking, as measured by oxygen consumption. And mentally they were not as tired, as confirmed by measuring brain activity.

In addition, the sensory feedback eliminated the phantom limb pain that affects a great number of amputees. That, indeed goes a long way to making walking for them a more natural experience.

Here is an explanatory video of how the prosthetic leg with sensors work:

Your ticket for the: New Prosthetic Leg With Sensors Works, Feels Like Real One

New Prosthetic Leg With Sensors Works, Feels Like Real One