June Is Alzheimer’s Awareness Month, Get Informed And Involved 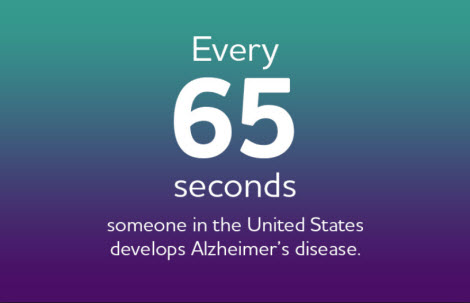 June is Alzheimer’s & Brain Awareness Month, get out there and get informed about this very serious disease. Indeed, Alzheimer’s is a major public health issue, not only here in the United States, but also world wide.

The fact is, that dementia and Alzheimer’s can hit anyone as they approach old age. The most vulnerable years start from the age of 60 and on up.

Everyone who has a brain is at risk to develop Alzheimer’s, and incredibly, it is the only leading cause of death for which there is currently no cure. Moreover, it is an illness that cannot be prevented or even slowed. The prognosis is terminal.

The cost of care is astronomical. Consider these statistics:

June: Alzheimer’s in the United States

During the month of June,  wear Purple.

The Alzheimer’s Association, asks for your support in raising awareness of Alzheimer’s disease during the month of June by participating in their Go Purple in June campaign.

For example, they suggest that you can show your advocacy and promote your efforts via your social media channels.

Go ahead and host a Purple with a Purpose Event, and show your love on The Longest Day, June 21, for someone living with Alzheimer’s.

Or you can organize a Walk to End Alzheimer’s event in your neighborhood. Be sure to wear purple on a designated day in June, just to let the world know!  And best of all, you can promote your event through the Alzheimer’s organization just by sending a photo of your activity.

Send it to rmcgill@alz.org and they will cross promote your efforts to #ENDALZ through their social
media channels. Join them on Facebook, Twitter or Instagram @alzheimersSEWI.

Your ticket for the: June Is Alzheimer’s Awareness Month, Get Informed And Involved

June Is Alzheimer’s Awareness Month, Get Informed And Involved