Healthiest Cooking Oil For You, Is It Olive Or Canola? 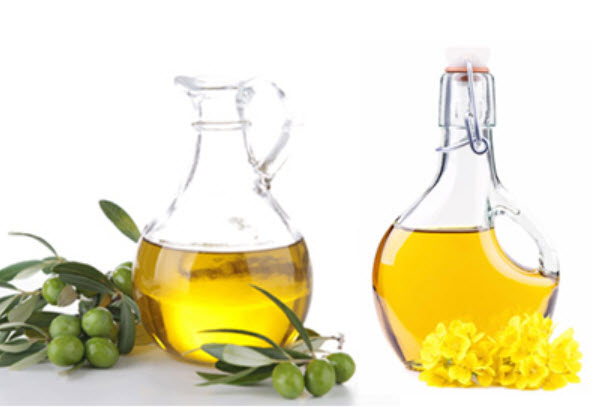 The fact is that both canola oil and olive oil are two of the most popular cooking oils worldwide.

They are both promoted as heart-healthy and share similar cooking uses. What are the similarities and differences between them, and which one is better for senior citizens?

Canola oil is made from rapeseed that is genetically modified to be low in toxic compounds like erucic acid and glucosinolates. This modification makes canola oil safe for consumption.

Canola processing involves several steps — heating, pressing, chemical extraction, and refining. The oil also gets bleached and deodorized which gives it a neutral color and odor.

On the other hand, olive oil is a ‘natural oil’, made from pressed olives.

Their nutritional profiles are similar to each other. But, a major difference is that olive oil provides more saturated and monounsaturated fat, whereas canola oil contains more polyunsaturated fat.

Both oils differ in their content of antioxidants. Antioxidants are important in your daily diet as they neutralize harmful molecules called free radicals.

Free radicals are very unstable and cause cellular damage when levels get too high in your body. Studies link free radical damage to chronic illnesses, such as heart disease, diabetes, Alzheimer’s, and certain cancers

Olive oil contains 200 plant compounds, including polyphenols, which act as powerful antioxidants in your body.

Specifically, extra virgin olive oil is packed with polyphenols.  Polyphenols are linked to a lower risk for heart disease, and reduced inflammation.

While olive oil can be used for frying, it’s more often consumed raw.

For example, extra virgin olive oil makes a great dip for breads. It also works well as a salad dressing and is delicious – straight from the bottle onto your favorite dish.

It has a bright color and spicy flavor, so cooking with it gives dishes a rich Mediterranean taste.

However, some people may find this flavor undesirable. In this case, regular olive oil, which has a more neutral taste, may be a better alternative.

On the other hand, canola oil is bleached and deodorized to give it a neutral profile. Unlike extra virgin olive oil, it isn’t commonly used in foods outside of fried and baked goods.

One major downside of olive oil is its high price. That’s why olive oil is not widely used in most commercial kitchens and restaurants.

Olive Or Canola For You?

So, when considering the healthiest cooking oils, no question that nutritionally, olive oil — especially extra virgin — is healthier than canola.

Additionally, greater olive oil consumption is linked to a lower risk of stroke and a reduction in heart disease risk. Bad cholesterol and triglyceride levels are also reduced.

On the other hand, canola oil is highly refined, which reduces its nutrients like essential fatty acids and antioxidants.

From our vantage point, olive oil is the preferred cooking oil.

Your ticket for the: Healthiest Cooking Oil For You, Is It Olive Or Canola?

Healthiest Cooking Oil For You, Is It Olive Or Canola?