ADHD (Attention-deficit/hyperactivity disorder) in adults can be treated by health care professionals such as psychiatrists, psychologists, skilled nurses, and social workers.

Adult ADHD symptoms can be caused by several medical conditions or may be a side effect of medications. Therefore, blood tests are done as part of the initial assessment. Occasionally, X-rays or CAT scans may be necessary. As part of the evaluation, the adult may be given a standardized questionnaire to determine the diagnosis. Some ADHD symptom checklists for children are adapted to screen for the condition in adults. Examples of such diagnostic tools include the Conners’ Adult ADHD Rating Scale (CAARS) and the Adult Self Report Scale. 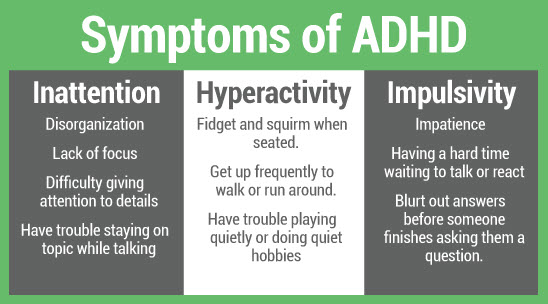 Adults with this disease are more likely to have low self-esteem, depression, and anxiety, and can not socially adapt. Hyperactive adults are at greater risk for underachievement in school or at work, being in more car accidents, using drugs and smoking.  In addition, anger management and antisocial behaviors, are prevalent.

Adults often benefit from being treated with a stimulant medication. Commonly, Ritalin or Dexedrine are prescribed.

If these do not work, longer-acting stimulants are usually prescribed. Examples include long-acting Daytrana patches, Concerta, or Focalin-XR.

Adults who have a history of drug abuse are better served with non-stimulant medications such as  Tenex or Intuniv, Catapres, or Strattera.  Vayarin, an Omega-3 supplement, which has a specialized delivery system, has also been found to be effective.

Patients also suffering with mood disorders can benefit by taking Wellbutrin or Effexor which treat both depression and anxiety.

The prognosis for adults seems to be influenced by the severity of symptoms, scores on intelligence tests, and whether there are additional mental health problems.  Depending on the patient profile, either stimulant or non-stimulant drug therapy has been found to be effective.

Your ticket for the: Adult ADHD Treatment By Health Care Professionals