Eyeglasses By Microsoft Can Now Monitor Your Blood Pressure

Eyeglasses manufactured by Microsoft can now accurately measure your blood pressure, no need to hook up to a cuff.

Up until now, a number of methods have been used to accurately measure blood pressure but each one had issues. Indeed, the upper-arm cuff remains the standard used in hospitals, clinics, and by patients at home. While the arm cuff is accurate, people that require frequent daily checks of their blood pressure, especially aged adults, find the arm cuff time consuming and inconvenient to use.

Eyeglasses: Microsoft Come Up With A Solution

Microsoft researchers developed a wearable set of glasses that can measure blood pressure using a combination of three optical sensors and a three-axis meter. The optical sensors detect heartbeat pulses in three spots on the head, while the meter detects the movement of the head. By measuring the time differences between when the pulses are detected at the three sites, the glasses can calculate the pulse transit time. This is the  speed at which  waves travel through the blood vessels. This measure, combined with other data, is extrapolated into an accurate blood pressure estimate.

Microsoft’s eyeglasses, called Glabella, performs these measurements thousands of times a day. It identifies the activities, diet, drugs, and other factors that affect the individual’s blood pressure.

The company recently filed a patent application for this device with the U.S. Patent office. 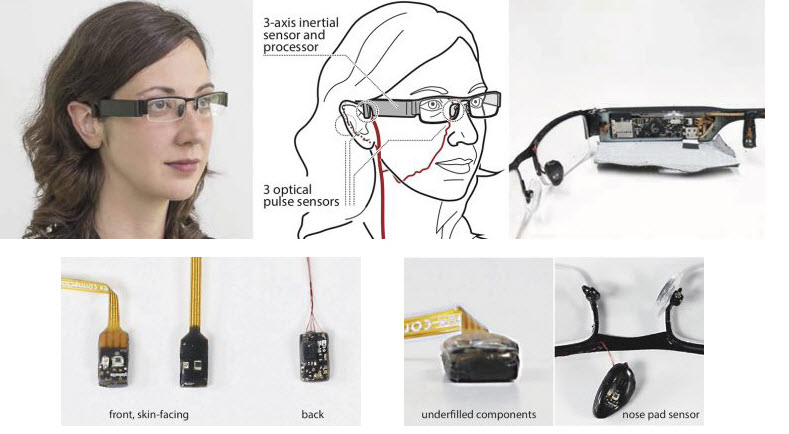 Your ticket for the: Eyeglasses By Microsoft Can Now Monitor Your Blood Pressure

Eyeglasses By Microsoft Can Now Monitor Your Blood Pressure