Exercise Sessions By Seniors Increases Life Span Regardless Of History 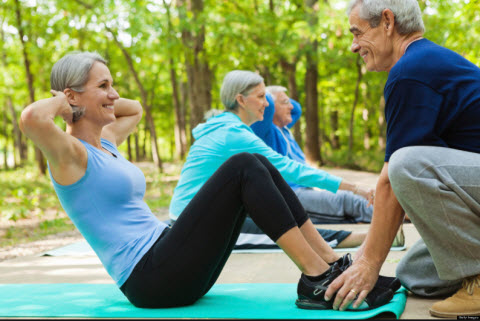 Fifteen thousand seniors between the ages of 49 t0 79 were tested for fitness over a span of  four years. The researchers found that exercise and increased physical activity over time correlated with lower mortality rates.

The results were very positive. For example, for every physical activity increase of 1 kg/day per year, mortality risk decreased by 24%.

Specifically, seniors who started an exercise program and did it consistently, showed a 29% lower risk of cardiovascular death. In addition, they also showed  an 11% lower risk of dying from any form of cancer.

The United States Department of Health and Human Services recommends that adults, especially seniors —  exercise for at least 2 1/2 hours a week. The exercise should consist of vigorous-intensity aerobic physical activity.

Most importantly, there were substantial benefits to seniors who suffered from heart disease or cancer. Consistent exercise increased longevity and improved their quality of life.

The researchers recommend that public health efforts and messages should also focus on the maintenance of physical activity levels. Consistency goes a long way to help prevent health declines and poor outcomes for senior citizens. Despite the travails of aging, maintaining a good quality of life for this population is important.

Your ticket for the: Exercise Sessions By Seniors Increases Life Span Regardless Of History

Exercise Sessions By Seniors Increases Life Span Regardless Of History