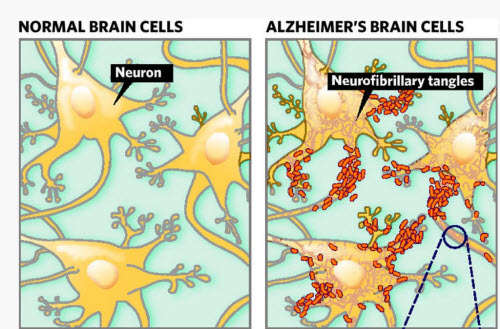 Previous reports showed that many Alzheimer’s patients do sleep a lot during the day, even when they already have had a full night’s sleep. Researchers speculated that there is a link between excessive sleepiness and destruction of brain neurons. This cause and effect could help diagnose the development of Alzheimer’s.
One suggestion is that the cause is a large amount of tau tangles in the brain that blocks cell transmission.  Tau tangles are proteins that block healthy cells from communicating and thereby cause cell death.

Dr. Grinberg and the team analyzed the brains of 13 dead people who had Alzheimer’s disease. Findings were compared to seven deceased individuals who did not have Alzheimer’s. These samples came from from UCSF’s Neurodegenerative Disease Brain Bank.

In comparison to the healthy brains, those affected by Alzheimer’s showed a very high amount of tau tangles across three brain regions that control wakefulness. These regions are the locus coeruleus, the lateral hypothalamic area, and the tubormammillary nucleus. Within each one of these regions, 75 percent of neurons were lost. On the other hand, in the control group, there was a non-significant loss of neurons in these three key wakefulness organs.

That all three centers are affected by high amounts of  tau tangles — gives the brain no way to compensate.

Previous research by the team, found that people who died with high levels of tau in their brain stem — corresponding to early stage Alzheimer’s disease — already showed excessive wakefulness.

Your ticket for the: Excessive Daytime Sleep Top Symptom Of Alzheimer’s Disease