Dehydration a Serious Health Issue For Seniors During Summer Heat 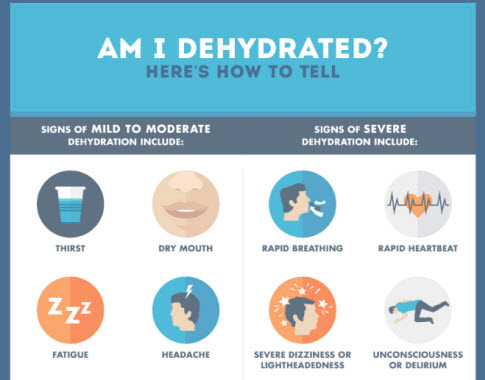 Dehydration and heat exhaustion is a very serious health issue for senior citizens during the hot summer months, according to the Centers for Disease Control (CDC).

Indeed, this past week end, the eastern two-thirds of the United States suffered through broiling temperatures that reached 110 degrees. The blazing hot temperatures affected more than 185 million people. Senior citizens, because of their weakened immune systems and the medications they’re taking, are the most susceptible age group.

Without taking proper protections, this steamy weather can worsen existing health conditions and lead to heat stroke, and even death.

For example, the CDC reports that 450 people died in 2017 because of exposure to excessive natural heat —-  almost two-thirds were 50+.

This number may actually be higher since heat waves can worsen existing health conditions, and lead to death at a later date.

Here are several tips from the CDC on how seniors can protect themselves during summer heat waves:

Our bodies are mostly (about 60 percent) water, and we can’t live more than a few days without it. Medical professionals recommend that we drink 8 (8 ounce) glasses of water every day, regardless of the weather. However, there really is not a set standard. For example, the National Academy of Medicine recommends that adult men drink about 15 cups (125 ounces) of fluid a day and women 11 cups (91 ounces). But, experts say the ideal amount can vary widely depending on factors including a person’s weight, health and activity level.

The fact is, by time you feel thirsty, you may have already lost up to 2 percent of your body’s fluid. Feeling thirsty, while it’s a key measure of thirst, does not always function well in senior citizens. Older people are less able to perceive thirst and thus their response times are delayed. In some cases, that may be too late.

In addition to thirst, your urine color can indicate dehydration. When urine is dark, it’s a sign that it is more concentrated due to less fluid in your body. “It should look more like lemonade, less like apple juice,” says Luke Belval, director of research at the University of Connecticut’s Korey Stringer Institute.

His other recommendation is to weigh yourself every morning. If you find that you’ve lost a pound or two from the day before, you are probably dehydrated. Weight loss from dieting does not happen that quickly.

Other symptoms-warning signs are of severe dehydration can include a dry mouth, headache, decreased urine output, increased pulse, lack of sweat, and irritability. In addition, you may also feel fatigued, nauseous, lightheaded or dizzy.

Drink frequently throughout the day. Don’t wait until you experience one of the symptoms listed above. Just keep your hydration levels constant.

Experts also recommend avoiding alcohol, which dehydrates the body. The same holds true for coffee and tea. These beverages are diuretics — meaning, they flush water out of your system.

Hear are several tips that will help you:

Heat can make you sick, and can quickly become life-threatening. The milder problem is heat exhaustion, which occurs when your internal body temperature begins rising too high. You may experience sudden fatigue and dizziness as your blood pressure rises. Stop what you’re doing, find a cool place, sit down and elevate your legs, and start drinking — slowly. Your blood pressure should normalize quickly.

On the other hand, heat stroke is a medical emergency. If not treated quickly, it can lead to death. Heat stroke happens when the body temperature reaches more than 104.5 or 105 degrees. At this point, the organs shut down and the person can become unconscious. If you’re assisting someone in this situation, call 911 ASAP. Cool the person down as quickly as possible, covering their body with as much ice water as you can.

These conditions are more prevalent in senior citizens because they don’t sweat as easily as younger people. In addition, due to their age, their blood vessels dilate more slowly and thus the built up heat takes longer to leave their bodies.

Older people also may have medical conditions or be taking medications that can impair a body’s ability to regulate heat.

So, stay cool and keep drinking.

Your ticket for the: Dehydration a Serious Health Issue For Seniors During Summer Heat

Dehydration a Serious Health Issue For Seniors During Summer Heat