A brain pacemaker implanted into the brain’s frontal lobe appears to slow the advance of certain symptoms caused by Alzheimer’s disease.

Called deep brain stimulation, or DBS, the technique has been used for many years to reduce tremor, walking difficulties, and stiffness caused by Parkinson’s disease. It’s also been studied as a treatment for depression and obsessive-compulsive disorder. 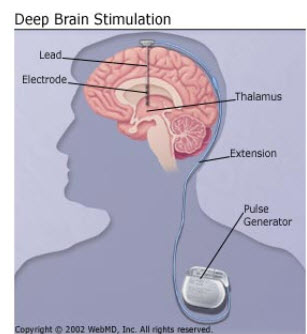 This study published Tuesday in the Journal of Alzheimer’s Disease, used DBS to stimulate a the frontal lobe which allows a person to manage daily activities.

Those kinds of abilities allow people to plan their day, pay their bills, pick out clothes to wear, and prepare meals. In Alzheimer’s, the frontal lobe is disabled and eventually is a fatal disease of the brain.Three patients were implanted with the brain pacemaker. Wires to the brain connected to a battery-powered box implanted under the skin, much like a pacemaker.
All three participants received  brain examinations, such as MRI, EEG, CT, and PET scans, at the start of the study. Another group of Alzheimer’s patients, served as the control group, so that results could be accurately evaluated.Cognitive tasks were tested continuously for two years.

Two of the three patients showed significantly less decline on a dementia test.  A third patient also showed improvement, but not as much as the other two.

Researchers caution that DBS likely does not actually reverse Alzheimer’s itself; instead, it targets specific Alzheimer’s symptoms that decrease daily living abilities.
In addition to its effectiveness, the treatment must also be safe and tolerable. Tom Moore agrees, and he has seen the benefits of such research firsthand. His wife of 65 years worked on a jigsaw puzzle nearby. He has watched her decline, but it has happened more slowly than it likely would have without the implant.The study’s over, but The Moore’s are continuing with treatment.
Alzheimer'sbrain pacemakerdeep brain stimulationelectrical stimulationfrontal lobePutnamRidge Health Center

Your ticket for the: Brain Pacemaker Offers Hope In Treating Alzheimer’s Symptoms