Without the cost-sharing reduction payments, projected to total $7 billion this year and $10 billion next year. Thus, Insurers will face big financial losses for the last three months of 2017 and will raise premiums sharply in 2018. 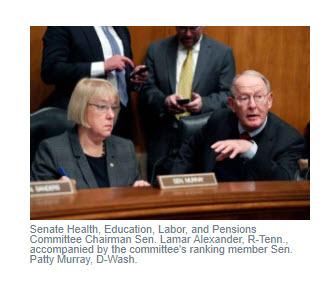 Healthcare industry groups welcomed the agreement, which averts an unraveling of the individual market and higher premiums. If the deal does not pass,  insurers will exit from the Obamacare exchanges.

President Trump Does Not Support

But President Donald Trump has given mixed signals about his stance on the proposal, calling it a “short-term solution”.  The long-term answer is giving states block grants to finance healthcare access, to repeal and replace the Obamacare that failed last month.

However, Mr. Trump pulled back his support hours later during a Tuesday evening speech at the Heritage Foundation. While Trump praised Alexander’s and Murray’s work, he said, “I continue to believe Congress must find a solution to the Obamacare mess instead of providing bailouts to insurance companies.”

Last week, Trump increased pressure on Congress to negotiate a deal by cutting off the cost-sharing reduction payments, calling them illegal payments because the money had not been appropriated by Congress.

Alexander said he hopes to release the market-stabilization bill later this week, in collaboration with Murray.

But it was unclear how open other congressional Republicans will be to any deal that they believe props up the Affordable Care Act.

“The GOP should focus on repealing and replacing Obamacare, not trying to save it,” Rep. Mark Walker (R-N.C.), tweeted Tuesday. “This bailout is unacceptable.”

It would speed the approval of ACA Section 1332 waivers allowing states to redesign their coverage systems, and relax the ACA’s affordability rules for qualifying plans. Any alternative model to the ACA coverage system would have to offer “comparable affordability” for consumers.

The proposal also would make high-deductible, “copper” plans available to people of all ages.

Alexander and Murray said they have the “basic outlines” of an agreement. The key difference is over the word “meaningful”, for example, will  states exert “meaningful” flexibility on coverage rules. Asked what the stumbling blocks to the deal are, Alexander replied: “The definition of meaningful.”

The agreement is not expected to stop Republicans from pressing to repeal and replace the Affordable Care Act.

The agreement “takes care of the next two years,” Alexander said. “After that, we can have a full-fledged debate on where we go long-term on healthcare.”

Your ticket for the: Bipartisan Deal to Fund Insurer Payments Uncertain