There are as many as 80 types of autoimmune diseases. Many of them have similar symptoms, which makes them very difficult to diagnose. It’s also possible to have more than one at the same time. Autoimmune diseases usually fluctuate between periods of remission (few or no symptoms) and flare-ups (worsening symptoms). Currently, treatment for autoimmune diseases focuses on relieving symptoms and preventing complications because there is no curative therapy. 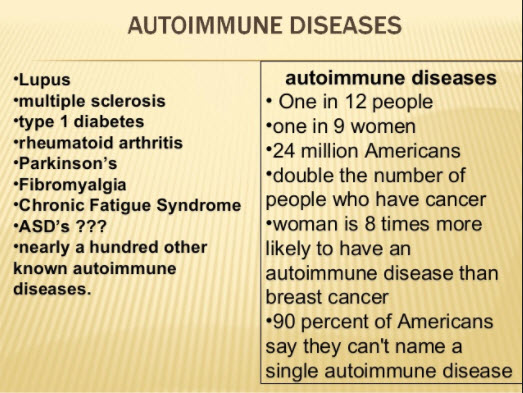 Here are examples of some of the autoimmune diseases:

The cause of autoimmune disease is unknown, however, there are many theories as to what the triggers are, including:

What is known, is that genetics is a factor. You may be more susceptible to developing an autoimmune disease if you have a family member with one.

Because there are so many different types of autoimmune disease, the symptoms vary. However, common symptoms are fatigue, fever, inflammation, and general malaise. Symptoms worsen during flare-ups and relent during remission.

Autoimmune diseases affect many parts of the body. The most common organs and tissue affected are:

The following tests are used to diagnose an autoimmune disease:

Autoimmune diseases are chronic conditions with no cure. Treatments try to controlling  the disease the by relieving the symptoms, especially during flare-ups.

These alternative therapies have also provided relief for some people:

Your ticket for the: Autoimmune Disease: Causes, Symptoms, And Treatments