340B Drug Pricing Program: What Is it, How Does It Work?

The 340B Drug Pricing Program was created in 1992 by the Federal Government to provide significant discounts on outpatient prescription drugs. Hospitals, skilled nursing homes, pharmacies, and health care facilities are eligible. The program, known as 340B, requires pharmaceutical companies to give steep discounts to hospitals and clinics that serve high volumes of low-income patients.

340B was designed to promote: 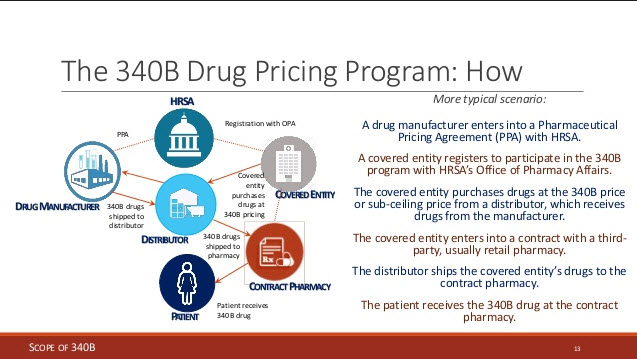 Under 340B, named after the section of the Public Health Service Act that authorizes it, eligible hospitals buy drugs at a discount from the pharmaceutical companies and then are reimbursed for those purchases from Medicare. The drugs are purchased under the Part B program, which covers expensive chemotherapy and other treatments in a hospital, doctor’s office and clinics.

Ostensibly, hospitals make money on the spread, using it to improve the financial stability of the hospital.

This program now faces a fight for survival as lawmakers debate the program’s reach. Earlier this month, The Centers for Medicare & Medicaid Services (CMS) announced a final rule to cut Medicare payments for hospitals enrolled in the program by 28 percent, or about $1.6 billion. The American Hospital Association, and others filed suit on Nov. 13. They argue that the agency lacks the authority to slash the payments and that they are undermining  the intent Congress had when creating the program.

In recent years, the Government Accountability Office and the Office of Inspector General, have evaluated 340B’s explosive growth. About 40 percent of the hospitals in the U.S. now buy drugs through the program, according to their reports. Lobbyists for the 340B  say, funding cuts, may put small rural hospitals out of business.

In contrast, those supporting the cut, including drugmakers, argue that the program has grown beyond its original intent because hospitals have pocketed the discounts to pad profits. The poor do not get the benefits.

Critics respond that the 340B needs reform, such as limiting which hospitals should be eligible for 340B price breaks and making sure needy patients benefit when hospitals buy discounted drugs.

If the new rule holds, Medicare beneficiaries will save an estimated $320 million a year on copayments. Medicare patients typically are responsible for a percentage of coinsurance on their prescriptions. The lowered Medicare reimbursement to hospitals lowers the enrollee’s coinsurance because Medicare would pay hospitals less for the drug.

Your ticket for the: 340B Drug Pricing Program: What Is it, How Does It Work?

340B Drug Pricing Program: What Is it, How Does It Work?